In honor of Halloween coming up, I’m giving everyone a more gory peek at my autokidney transplant and an update on my recovery. Literally a look at my insides, so beware of the ooey gooey, and bloody pictures for this post. (OK, not really gory — kinda cool, actually.)

Let’s start with an inside look at the auto transplant. 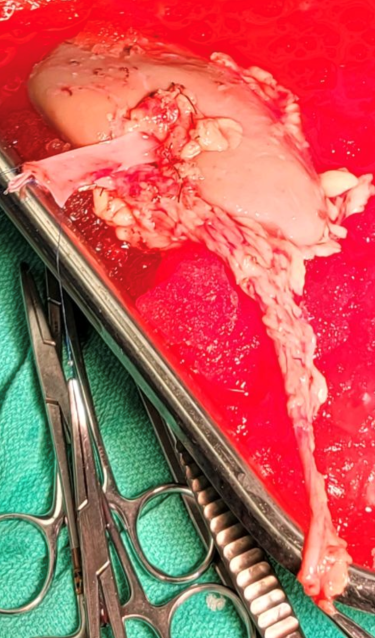 Is this what a normal kidney should look like? I had no idea. It’s not like I’ve seen another kidney in my lifetime. However it looked normal enough to me considering I’m not sure how it would be abnormal. However, take an extra close look at this guy. 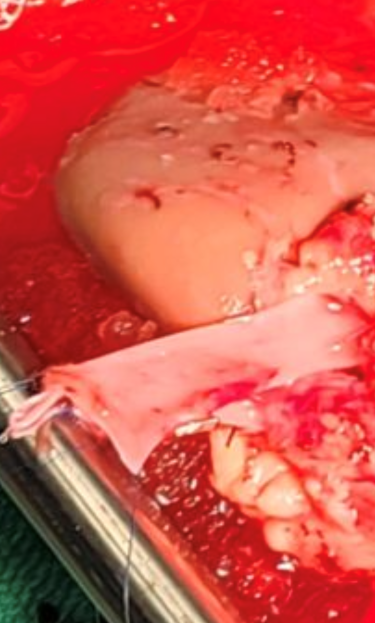 Dr. Zendejas says my kidney itself is beautiful and healthy. It’s that nasty, deformed-looking vein sticking out of it that was causing my problems. That’s the main renal vein.

Anatomy lesson: There is a renal artery and a renal vein. The artery carries oxygenated blood from the heart to the kidneys where it combines with food and is broken down into energy (that’s a way simple version, but I’m not a doctor). The vein carries the blood that has been cleaned by the kidneys back to the heart.

It’s one thing to hear that I had Nutcracker Syndrome, meaning my renal vein was compressed and blood wasn’t getting through. It’s a whole different ballgame for me to be able to see it. See how nasty and flat that thing is? Dr. Z said that vein should be less than half that size, and of course it should actually be, you know … ROUND. Not flat as a pancake. It was completely compressed to where literally no blood was getting through. I won’t even go into all the places in my body that were affected because that is a much lengthier anatomy lesson. And I’m tired.

Another peek at what was once on the inside … Last week I had to go get a stent removed that Dr. Z placed to help my kidney be used to being on the right side with my other kidney. When he said stent, I pictured a small, thin, kind of tapered piece of metal. Kind of a smaller version of what the stent they put in for my May-Thurners. Almost like a really really really tiny washer or something.

I was nervous about having it taken out, especially since they told me I would be awake. I hate it when they do things to me while I’m awake. I went to a urologist to remove it since they take it out through your bladder. Luckily they didn’t even have to cut in to me. Unluckily, they shoved a little scope up my bladder. They said it was going to take 10 seconds and I thought they were understating it a bit because I was so nervous and they wanted me to feel better. But it seriously only took 5-10 seconds. The assistant prepped me and put some lidocaine to help the pain, then the doctor came in and said, “Hi. Alright you can look at the screen and watch.” I looked at the screen and in he went, 5-10 seconds to go in, grab the stent, and pull it out. It was really cool and morbidly fascinating for me to watch. Guess my surprise when he pulled this out though. 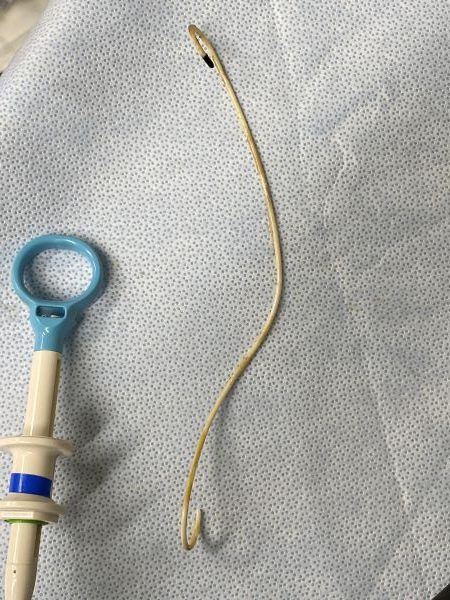 Not at ALL what I was expecting. Not in the slightest. Weird to think that the stent was this weird long round tube thing. Odd to think that was in my body. Also a little gross when you consider all the crud on it are my insides.

Five weeks post op and 1 week with the stent being out, and I’m doing great. Tired, but great. I’m still not wearing my compression stockings, although after the stent removal my feet have been hurting a bit again. Which makes me super nervous. It’s a different kind of pain, but also kind of similar. It’s hard to describe, but I try not to think about it much. I don’t want to think about the fact that my foot pain could possibly be coming back. I’m hoping that it’s just my legs and feet getting used to the stent being removed. The stent wasn’t placed there to be permanent, so having it removed shouldn’t have any side effects. It was only placed to help the kidney connect to where it needed to. Dr. Z did say that it would be about 3 months to notice all the differences and for the AT to have been healed, so I’m hoping that this foot pain coming back ISN’T permanent and will go away soon. It’s also a bit odd because sometimes I can stand for an hour without this weird pain, but sometimes I can’t stand 5 minutes without it. But I’ll keep everyone updated on that.

I am very happy and very grateful to have had this auto transplant done. I’ve been a lot happier because I’ve been in a lot less pain for the first time in 9 years. My husband keeps saying “you’re really hyper” or “you’re in a good mood” because I’ve been so happy I’m practically bouncing off the walls. I’ve been with my husband for almost 3 years now, so he’s never known a Becca that’s not in a crazy amount of only barely bearable pain. My family, on the other hand, says that they can see their “Becca Bunny” coming back. (I got that nickname as a child from the Energizer Bunny who keeps going and going and going …) It makes my parents so happy to see their old Becca Bunny. My husband on the other hand … Well, I’m not sure he’ll be able to handle Becca Bunny. She’s pretty hyper and bouncing off the walls happy and that’s not something he’s used to yet. Isn’t that a great thing for him to have to get used to, though?

On a side note, I received this hilarious text from my Grandma Salisbury a couple of days before the transplant:

I didn’t even know she had 3 kidneys, let alone 2 on one side. Apparently she was born that way. It’s a genetic thing. I can say that she was correct. Five weeks post op and I don’t feel lopsided either.