In April of 2020, I was doing “great.” Of course, great by my standards is barely survivable by most people’s. My daily life includes leg pain so great I can only stand for 2 or 3 minutes – and that’s with compression stockings on. Without them, I can’t stand long enough to brush my teeth. My arms have the same problem and I can only use them for small spurts before they ache so bad I want to cry. Then there’s my back pain. But that’s a story for another day.

That said, considering it’s, you know, ME, with all my physical nonsense to contend with, my life and health were better than they had been in 8 years. I had just gotten married. I had hope for the most normal life chronically ill Becca could have. I had had one major stomach surgery and three brain surgeries to fix a myriad of issues that kept me from being able to do absolutely anything. Yet this circulation issue was still something we hadn’t remedied.

I met with my doctor and physical therapist, both whom have helped me tremendously and who I owe my current level of health to. (Believe it or not, it has been much, MUCH worse.)  Both insisted I needed to get tested for Nutcracker and May-Thurners Syndromes, neither of which I had heard of. I had looked up the symptoms and convinced myself that I didn’t have either. I told them I didn’t want to get tested because I didn’t have them. April Becca was in denial. April Becca just wanted a little respite from 8 constant years of being poked and prodded and given new medications to try. April Becca was afraid of going into yet more surgeries. April, newly-married Becca then became bed-ridden for 2 1/2 months. Of course. Because that’s what I do…

I decided to get the tests done, and yup – I’ve got them.

Let’s talk about May-Thurners. May as in the month, Thurners pronounced Turners. Why is there an “h” in there when you don’t even pronounce it? Don’t ask me, but it bugs me.  May-Thurners is a compression of the iliac vein. The pressure of the left iliac vein causes the blood to flow abnormally, resulting in complications. There can be many symptoms, but some of mine include:

Here’s the funny part. These symptoms are the issues I’ve been struggling with allllll the way back to 9th grade. So why did I refuse to get tested earlier? I was scared. I still am scared. I’m learning to admit that I have some major PTSD when it comes to hospitals and surgeries. I’ve died twice having two completely different surgeries because of freak accidents that shouldn’t have happened. So I tend to expect the worst when it comes to my health. The smallest and most simple surgery could turn into a life-altering one, but more into that later.

I met with a doctor who did a venogram and nerve block to see the severity of the May-Thurners and if the Nutcracker surgery would work based off if the block took away pain or not. Luckily for me the block did relieve my leg pain for a couple of hours. I stood without compression stockings!  For 90 minutes!  In a row!  90 minutes is usually more than I’m able to stand in a month.

We immediately got a stent surgery scheduled to help with the May-Thurners, and going in I thought I was mentally and emotionally prepared. When we arrived the doctor said, “You’ll be in A LOT of pain for a few days. You’re going to feel like something went wrong because you’re in so much pain. But I’m telling you, nothing went wrong and don’t waste time or money going to the ER. Things should return back to normal in about a week.” Comforting right?

This surgery was on August 23rd. She was right. Recovery has been ROUGH!  Lots of back pain, and surprisingly excruciating stomach pain. So much pain I haven’t been able to talk for several days. So I type. And of course that hurts, too. 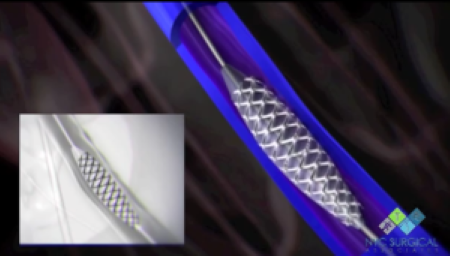 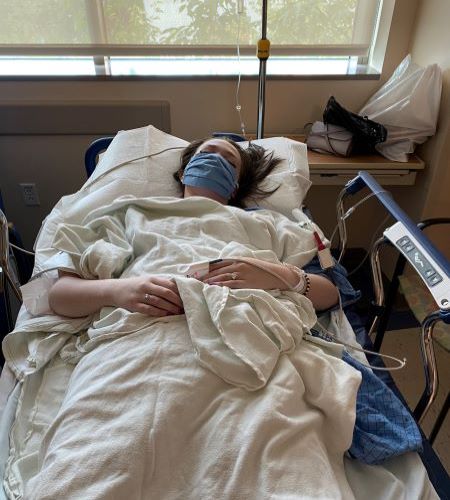 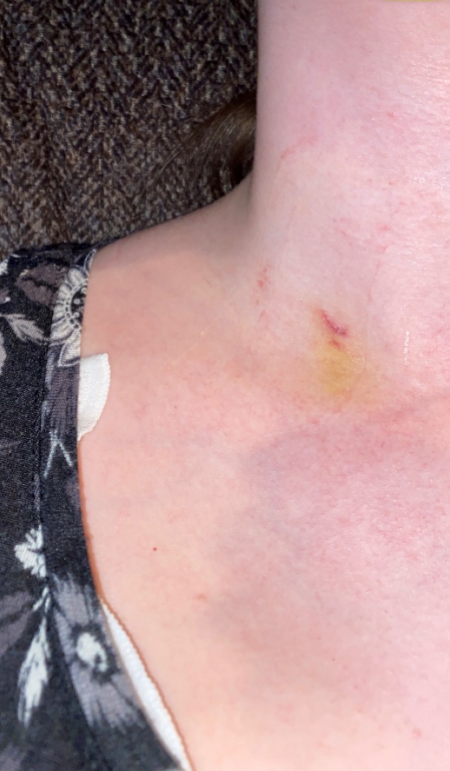 It will be worth it if it is part of the equation that gives me my arms and legs back. In conjunction with the auto-kidney transplant they are going to do for Nutcracker, which I’ll talk about in my next post, hopefully my body pain will be fixed to a huge degree. Hopefully after 8 years of pain I’ll be able to walk through the grocery store instead of having to be in a wheelchair. Hopefully I’ll be able to own more than one pair of shoes since every other kind I try on causes my feet great pain. Hopefully I’ll be able to hold a baby in my arms since I want so desperately to be able to have one (or two or three) someday. Hopefully I can sit in a normal chair without it causing me tremendous pain.

I’m scared about this transplant. I’m terrified, actually. No doubt about it. But tomorrow… I am going to tackle this monster.