Bullying: Our Other Epidemic 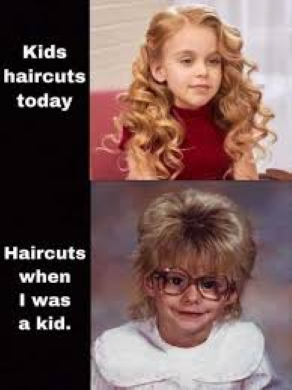 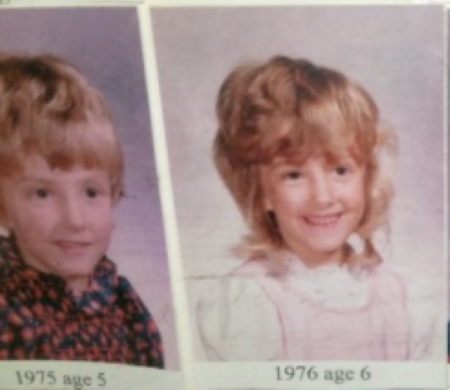 Who in their right mind would have let me have this haircut? Let alone go out in public with it? For two years in a row, apparently…

I saw this meme a while ago and it made me shudder. Not just because I had that hideous ‘do, but because it is fascinating to see how far I’ve come over the years. I’m mostly happy with who I am now. Not so much back then. In this picture it is pretty easy to see why I was bullied growing up. And that coif was just the tip of the iceberg. Some of my other “faults”:

? I was made fun of relentlessly for being too thin. People teased me by saying I had an eating disorder — which I knew was incredibly serious and didn’t think was funny at all. I also remember being told I was so skinny I could tread water in a garden hose.

? That tall and thin body type left me the most uncoordinated person in class. Always the last person picked for any gym-class team. Always the one lacking any sense of grace or athleticism.

? In high school I had Bells Palsy and half of my face was paralyzed. I was constantly teased as it looked terrible, my mouth wouldn’t work right and I couldn’t get my left eye to close. I spent several years covering my mouth with my hand whenever I smiled. To this day my mouth has never fully recovered. You will never see me smile in pictures because the left side of my mouth still won’t go up when I try.

? My family was very poor and most of my clothes came from the thrift store or the generosity of neighbors. That included girls who were always more than happy to let me know that the clothes I was wearing were old rags they no longer wanted.

? I have scoliosis plus another nasty curve in the bottom of my spine. It has always given me bad posture and makes it physically painful for me to stand up straight. Kids would mock my rounded shoulders and call me the Hunchback of Spokane.

? I was smart. That’s a plus in my book — but it wasn’t in anyone else’s. You pick the nerdy adjective and I was called it!

I won’t lie — it was tough on me. But I think kids today have it much tougher. Much! MUCH!

I had the ability to go home and hide in my room until I had to get up the next horrifying day and face it all again. There was some respite in only having only one phone line coming into the house and no one having any access to me while I was hiding. No one had the ability to carry a camera with them everywhere they went, hoping to catch someone else’s embarrassing moment on film. With today’s technology now permeating every crack and crevice of our lives, there is no outrunning it. The mere posting of a fun selfie can result in hundreds of nasty critiques and comments of every kind, not just by the people we know, but by a universe of anonymous Internet trolls whose own sadnesses, failures and aggression cause them to attack anyone they can at any time or place they can.

What a sad commentary on society that anyone feels it’s okay to publicly minimize, mock, demean, insult, humiliate or otherwise abuse anyone they want just for the sheer fun of it. How do people get to a place where causing other people to suffer provides entertainment value?

I’m not a psychologist, so I’m not even going to pretend to get into those Hows or Whys.

What I do want to say during this anti-bullying month is that we need to recognize it for the plague it has become.

Today we have a physical, viral plague that has brutally affected the lives of all of us. It threatens not only our health, but our economy and our sense of community. None of us really get to live the life we want to live. Because of this threatening nature, we take many precautionary steps to lessen its impact. Science is hurriedly working on a vaccine to protect us going forward.

Why can’t we give bullying the same treatment? It, too, can impact every facet of our lives. It can leave us fearful, full of anxiety, and unable to live the life we want to live. It causes lifelong damage to millions and millions of us. Yet it only seems to get worse. There is no vaccine coming down the pipeline to protect us.

So what can we do when there’s no national campaign that can swiftly eradicate this epidemic? What can I do? Since I’m an alliteration junky, many thoughts came to mind:

Compliment instead of Criticize

Build up. Don’t Beat Down.

Remember …? I’m a word nerd. So I could go on and on. But I’ll save you the eye rolling.

The fact is, we shouldn’t need a fancy hashtag to make us want to do the right thing. Only the determination to make a positive difference in the small realms of influence that we have. Trust me — every little bit helps for that one person we show kindness to or defend toward the meanness of others. We may think that it is insignificant, but I bet if you could contact trace the impact that your kindness has, the resulting map of connections would astound you. The ripples of your kindness reach so much farther than you think they do.

Don’t ever think your influence is insignificant. Because it’s not for the people whose lives you impact. If we all work within our own little realms of existence to make sure that bullying isn’t tolerated and that we defend those who need it, the combination of those small efforts will make an enormous difference in the world.